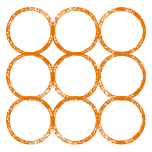 A Seed’s Many Blessings

High in the hills of the Tango Peninsula, the birthplace of Wakuden, terraced paddies climb as far as the mountainous landscape will allow. In a large forest above them wild boars and deer roam and a waterfall feeds cold, clear water into the stream that floods these fields.Hundreds of tadpoles skitter about in the shallow water under a high July sky.
As summer progresses the green will intensify and as autumn approaches heavy heads of grain bow between the blades of grass. Tadpoles grow into frogs feasting upon devilish grasshoppers and shield bugs that devour the crop. Susumu Honda, who stewards these fields and shepherds the rice from seed to harvest, catches a grasshopper with his hands. When caring for the rice, they and weeds require the most diligence and he is grateful to the frogs and spiders who assist.

About twenty-five years ago Honda returned these fields to pesticide-free, organic cultivation at a time when his daughter suffered from chronicatopy. Doctors said it could not easily be cured which as a father he couldnot accept. He reasoned that if fundamentally the human body is made of thefood we eat, his daughter’s condition was likely the result of somethingharmful in her diet, pesticides being one of them. Though he would have toaccept lower yields and battle weeds and insects, he felt determined.Todayhis fields of Isehikari rice are robust and thriving.

The legend of Isehikari rice speaks to the heart and history of a small island nation where for centuries the whims of deities have ruled the elements. After a powerful typhoon devastated the divine rice fields at Ise shrine in Mie Prefecture, a few surviving stalks were found among the damaged crops, a blessing amid boundless destruction. All future yields from these miraculous grains, it was decided, would no longer be called by its varietal name, Koshihikari, but by a devotional name, Isehikari.

Isehikari’s path from Ise shrine to Wakuden’s door and then into Honda’s fields in Tango felt similarly auspicious, says proprietress Yuko Kuwamura. A few unhulled stalks gifted by a cherished client would answer a calling stirring within, that the food of her ryotei should be more than just delicious. She felt compelled to move away from anonymous, story-less ingredients and join a growing community of producers committed to fostering healthy ecosystems, a shift that would allow her traditional, fine-dining restaurant in Kyoto to deepen its relationship with the main ingredients of their craft and better nourish those who came to dine.

There is perhaps nothing more potent than a seed. Cradle one and you quite literally hold the future in the palm of your hand. From a single grain of rice a hundred more are born and soon Honda had propagated a sizable crop of Isehikari for Wakuden. Now, on a day each May, a party of employees and guests travel from Kyoto city to meet him in the hills of Tango. Together they spend a long morning, backs bent, plunging seedlings one by one into muddy soil. Throughout the hot summer months until harvest in October, staff members return to Tango each week to help maintain the paddies.

In the kitchen in Kyoto chefs prepare ingredients with koji made of rice that they and their colleagues planted by hand. In the dining rooms attendants offer tales of weeding the very rice from which the sake they serve was brewed. Year round, the life of this grain feeds the bond between the ryotei in Kyoto is its homeland in Tango.

Prairie Stuart-Wolff is a writer, photographer, and avid home cook who upon moving to Japan in 2007, immediately recognized the great depth and beauty of Japanese culinary traditions. She produces Cultivated Days, an online journal that investigates and celebrates the ingredients, principles, and practices of Japanese food and culture in context.